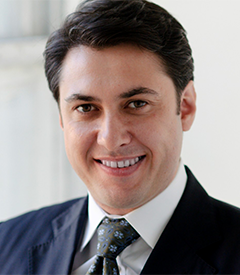 I am an American-trained litigator and an international arbitration specialist with over fifteen years of legal experience. To date I have been involved in more than sixty international arbitration and litigation cases in commercial, investment, business-of-sports, and public international law disputes before ICC, ICSID, LCIA, ICDR, BCCI, VIAC, RCC, and UNCITRAL ad hoc tribunals, US and EU courts, as well as supra-national fora such as the European Court of Human Rights and the International Court of Justice.

Prior to qualifying in the US through a J.D. from Columbia Law School I was a practicing EU lawyer based in Sofia, Bulgaria (Mag. Iur., St. Klement Ohridsky, University of Sofia). The highlights of my practice in the EU included the defense of a sovereign in a set of international arbitration disputes with a joint-venture of construction heavyweights, the defense of the largest EU-wide contested merger before the European Commission, and various international arbitration and litigation matters involving IP, M&A, antitrust (hostile takeovers), cross-border commodities supply, complex infrastructure projects, and the energy (oil & gas and electricity production/distribution) industry.

After my transition to the US I spent time in three of the largest international arbitration practices out of Washington D.C., New York, and Paris, France. As part of these teams I have represented private parties and sovereign bodies in numerous high-stake construction, energy, global distribution, infrastructure, finance, insurance/reinsurance, and telecommunications disputes in commercial and investment arbitration cases.

Publications
Teaching Appointments
We use cookies on our website to give you the most relevant experience by remembering your preferences and repeat visits. By clicking “Accept”, you consent to the use of ALL the cookies.
ACCEPTREJECT
Manage consent

This website uses cookies to improve your experience while you navigate through the website. Out of these, the cookies that are categorized as necessary are stored on your browser as they are essential for the working of basic functionalities of the website. We also use third-party cookies that help us analyze and understand how you use this website. These cookies will be stored in your browser only with your consent. You also have the option to opt-out of these cookies. But opting out of some of these cookies may affect your browsing experience.
Necessary Always Enabled

Performance cookies are used to understand and analyze the key performance indexes of the website which helps in delivering a better user experience for the visitors.

Analytical cookies are used to understand how visitors interact with the website. These cookies help provide information on metrics the number of visitors, bounce rate, traffic source, etc.

Advertisement cookies are used to provide visitors with relevant ads and marketing campaigns. These cookies track visitors across websites and collect information to provide customized ads.

Other uncategorized cookies are those that are being analyzed and have not been classified into a category as yet.

SAVE & ACCEPT
Scroll to Top